I’ve been looking for a different job, one with more potential to learn and actually dealing with database administration instead of just pulling reports.

But I haven’t conducted a real job search in a long time.

I’m on LinkedIn, but I’ve never been very good at networking.

And I have a problem with confidence.

In November, I attended an event cosponsored by Women Veterans Connect and Swords to Plowshares in San Francisco.

Over the years, I’ve said that I missed the military, but until I was surrounded by other female veterans, I didn’t realize how much. It was a great day, a great environment. I had a lot of fun and met a lot of people. I was able to connect to some of them on LinkedIn.

One of the women, Melissa Washington, is the expert networker I’ve never been – and we were on the same West Pac in 1993/94. We didn’t know each other then, but the coincidence is so cool. (Melissa has also written a book Get Back to Work

Anyway, Melissa realized that several of us drove out to San Francisco from the Sacramento Valley area and asked us if we wanted to start a local Women Veterans Networking group. Heck yeah! We had our first meeting a couple of weeks ago. It was a lot of fun! And I think I made some connections that will turn out to be valuable in multiple ways. 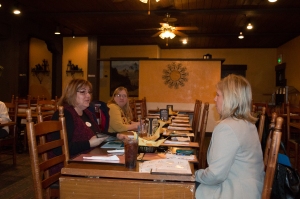 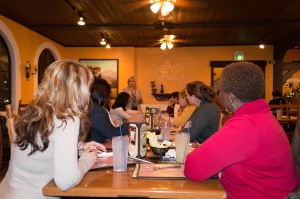 When it comes to updating my résumé and selling myself, I’ve got trouble. I suppose a lot of people do. I’ve been reading job descriptions and sample résumés and getting discouraged.

Almost all of them have multiple programming languages (R, Python, C++, etc) in addition to SQL skills and experience listed. I can learn programming languages, but it’s hard to figure out what to concentrate my limited study time on. What direction do I go? I was starting to panic that maybe I’ll be stuck in this job forever because I can’t get up the courage to go anywhere else because of my hesitation to learn programming.

A friend mentioned she was taking a couple of courses on Coursera. I looked into it and there’s a data science sequence from Johns Hopkins that will work for me. It’s a lot cheaper than any grad degree or certificate program I’ve looked at. I’ve signed up to start on Monday.

I’m still working on the SQL Server certifications as well.

Last night, I found CodeSchool and did a very brief intro to programming in R. I was immediately pretty comfortable with it, as it’s based on Linear Algebra (scalar vectors, matrices, etc). Maybe it won’t be that difficult to get up to speed on what I need to know.

The last couple of months, I’ve kind of drifted, lost sight of my goals.

I wanted to start playing with SQL Server 2008 at work, but I end up always working in Access instead. I’m also pulled in a lot of different directions as I do desktop and network support as well as reporting and still a little bit of clerical work.

The blessing and the curse of working for a small company is that you get to do a lot of different things. On the one hand, it means you’re always busy and always learning. On the other, it’s hard to concentrate on just one task.

Anyway, I studied for and took the MTA: Operating System Fundamentals test instead of studying for a SQL test. I thought, “I’ll get better at this part of my current job before I move on to the next phase of the SQL learning.”

I finally took (and passed) that test last week. I realized while studying for it that I did NOT want to go into the desktop support and/or network engineer stuff. I really do want to play with data.

Refocusing on that, I also realized that it would probably be better to go with the 2012 SQL Server stuff than the 2008, even though a lot of companies are still running on 2008, and even though the company I currently contract with uses 2008.

On Microsoft’s Virtual Academy, there’s a lot of training material for 2012, and none for 2008. That was a very influential factor in my decision. I don’t think you can use the MVA alone to pass the exams, but it is a very helpful supplement.

I’ve purchased the Training Kit and the Joes 2 Pros Volume 1 to get me started.

It took me a bit to get SQL Server 2012 installed [insert long boring story about needing to install Service Pack 1 on my Win 7 laptop before I could get started. . .] but tonight I got it all up and running.

Because of some things that have happened at work lately, I’ve been questioning whether I really want to go in this direction or not. Yeah, I’ve got the math degree and it seems like a good fit with database stuff, but can I actually do the work? [The old impostor syndrome rearing its ugly head].

There are days when I figure out something complicated and I think, “YEAH, this is it!” and there are times when I mess up on something simple and think, “Who the hell am I fooling? Myself mostly.”

Tonight, I started reading the Training Kit and Chapter 1, Lesson 1 is about mathematical relations, set theory and predicate logic. I was having flashbacks to Modern/Abstract Algebra classes and felt like it’s validation of what I’m doing. Yes, this is the right direction now.

What I’ve been babbling about

Being confronted with adversity in your life is inevitable. Just keep in mind that it does not have to defeat you. Adversity is often short lived. Giving up is what makes it permanent. As a certified fitness professional, this blog is my way of helping you feel capable of anything.

Lover of math. Bad at drawing.

Your search for SQL training is over,

Thomas LaRock is an author, speaker, data expert, and SQLRockstar. He helps people connect, learn, and share. Along the way he solves data problems, too.